Determination and Identification of Entomophagous Insects and Insect Pathogens

Several taxonomists in Europe, specialised in different groups of insect parasitoids and predators, cooperate in the identification service of reared specimens which are sent to the commission.

The commission provides a free service for IOBC-WPRS members, working with pest species, their natural enemies, and insect pathogens, who need help in identification of specimens from Europe and the near East.

The commission compiles the data on those species, which have been reared from definite hosts during a research project and which could be determined to species level. These results are published irregularly within the IOBCwprs Bulletin:

The aim of the commission “Identification of entomophagous insects and insect pathogens” is to support researchers who have to deal with unknown parasitoids, predators, or pathogens from Europe and the Near East. Single specimens and smaller samples can be send to Hannes BAUR (entomophagous insects) or Regina KLEESPIES (insect pathogens) who are either identifying specimens themselves or organize identification by specialists. The idea is to provide some initial help with identification of some specimens, which might serve as a reference in the case of larger samples. It should be clear that specialists cannot deal with larger series of specimens. The service is free for members of the IOBC-WPRS. A list of identifications is published occasionally in the IOBC-WPRS Bulletin, e.g. IOBC-WPRS Bulletin 28 (11) 2005, 71 pp.

Researcher sending specimens of entomophagous insects for identification should be aware that identification may not always be successful. Especially many groups of parasitic wasps are taxonomically poorly known, so that for instance new species might be discovered during an otherwise strictly applied project. In the course of my work for the IOBC I have encountered several times a situation, where some applied investigations resulted in a taxonomic study. Two cases are detailed in the following.

The first case occurred during a survey of parasitoids (of genera Mesopolobus and Trichomalus, Hymenoptera, Pteromalidae), which were considered for release against the cabbage seedpod weevil Ceutorhynchus obstrictus Marsham in North America (Gibson et al. 2005). One of the most common species, Mesopolobus morys (Walker), then proved to consist of a complex of two cryptic species, which could only be disentangled in a separate taxonomic study (Baur et al. 2007). 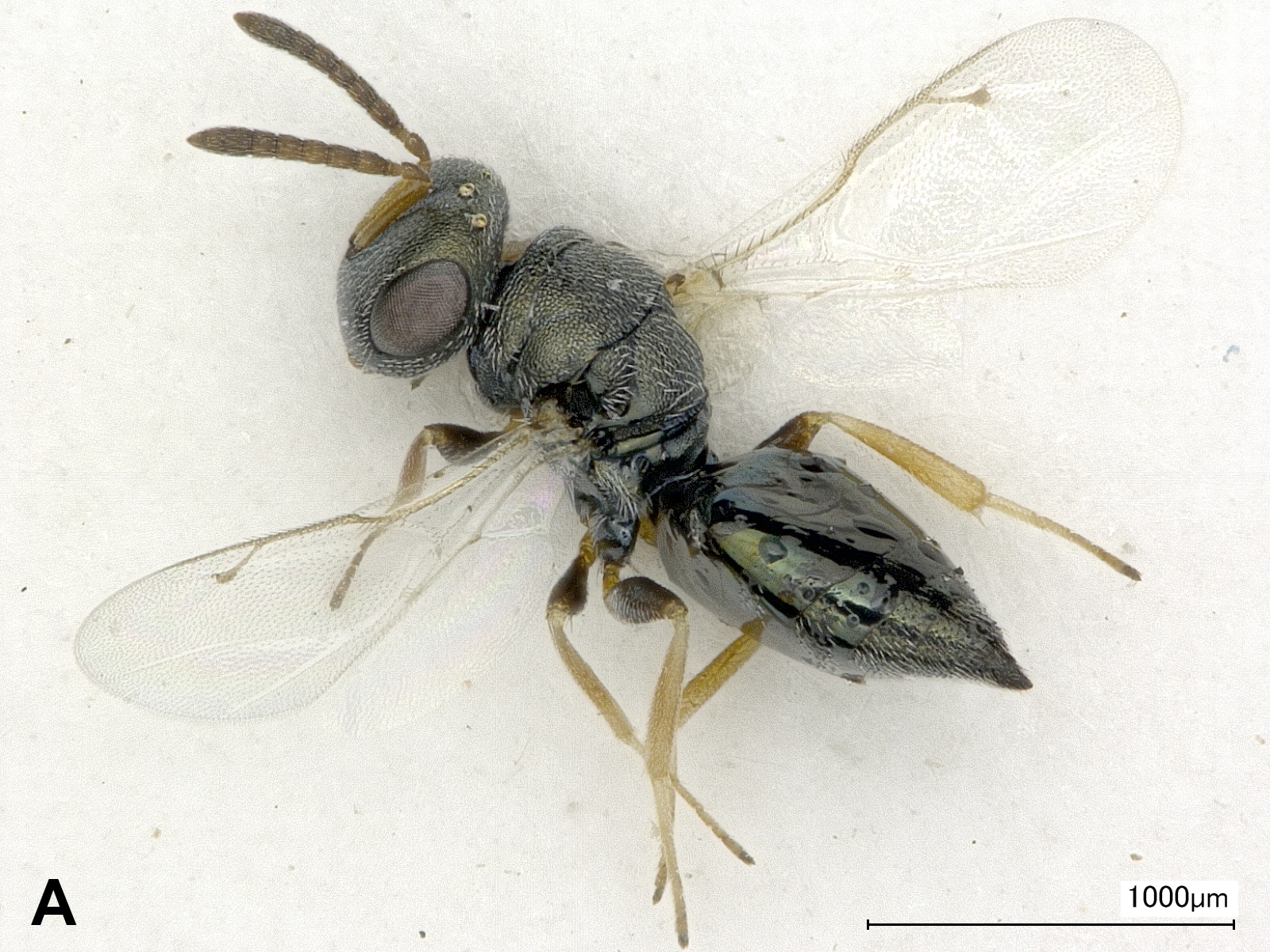 The second case concerns Anisopteromalus calandrae (Howard) (Pteromalidae, see Fig. 1A), an important parasitoid of pests of stored products like cereals, e.g., the granary weevil Sitophilus granarius (Linnaeus) or the drugstore beetle Stegobium paniceum (Linnaeus). For a long time, A. calandrae has been considered as one of the major antagonists of these pest species and has also been used in biological control. However,  the karyotypic investigation of Gokhman et al. (1998) has then revealed that two species were hidden under the same name. The second species was described only recently as A. quinarius Gokhman & Baur (Fig. 1B) by Baur et al. (2014). The discovery of this new species is of course of significance for any biological control project, as the two species differ strongly in their host preferences: A. calandraeprefers Sitophilus while A. quinarius naturally occurs on Stegobium. Both species can also be reared on the alternate host, but only at the cost of fecundity and some other fitness parameters.

These two examples should make it clear that even in ordinary biocontrol projects the discovery of new, cryptic species is nothing very uncommon. It therefore seems sensible to include in the planning also some resources for taxonomic work, at least when the identification of a parasitoid is considered crucial for the success of a study. In any case, it is certainly wise to incorporate taxonomic expertise already at the beginning of a project, not only at the end.

The general goal of the commission is to compile a reliable database of insect pest species and their natural enemies including microbial antagonists and to bridge the gap between biological control research and sound taxonomic knowledge.